(ExpertAssignmentHelp does not recommend anyone to use this sample as their own work.)

The report analyses the strategy referred to as 'Porter's Five Force Framework', with an understanding of its usage in a business environment and its strategic abilities to be used in formulating a corporate business strategy. It analyses the importance of the framework in business decision making in areas of diversification, innovation and change in leadership in a business. An overall analysis includes an assessment of the competitive rivalry that exist within the industry, the bargaining powers of suppliers and customers, the threats posed by the new entrants and substitutes for the product, is analysed and critically reflected upon to assess their importance in the changing face of the businesses as well as the advantages and challenges associated with the use of the framework in a business, would be covered under the report (Jurevicius, 2013).
All such analysis have been considered to be of importance, keeping in mind the debate that questions the value of the age old framework used over decades by businesses to bring out competitive advantages and lead the organization towards long-term success.

The Porter's Five Force Framework devised by Professor Michael Porter has seen its usage in both businesses as well as marketing related planning for organizations. The framework was introduced in 1979 in Porter's first article in the Harvard Business Review publishes in the name of 'How Competitive Forces Shape Strategy', to assess profit potentially in the market as well as devising a competitive edge by analysing the level of competition that exists in the market or business segment (Martin, 2014).
The purpose of the model is to analyse, the industry attractiveness and competitive forces that exist in the industry, that are needed to be analysed before initiating a new business or gaining a competitive edge in an existing business (Roy, 2011). On analysis of the above areas, it is by means of sound strategic corporate strategies, an organization can target to shape the forces in a way that they support the organization's success among all forces in the marketplace.

Deducing the fact, that a market being attractive does not guarantee the success of all organizations, it is the conglomeration of devised strategies, processes and devising the unique selling proposition of its products and services that an organization can rule in the market (Morris, 2013). Considering such challenges brings in the descriptive analysis of all its dimensions rather than just a filthy understanding. 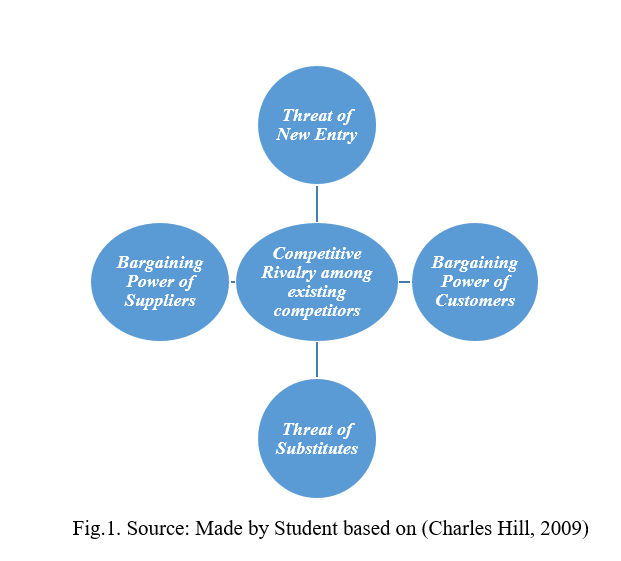 The five forces as shown in the diagram are widely categorized under horizontal competition and vertical competition forces based on the impact they make on the organization and its functions, where rivalry, the threat of substitutes and that of new entrants fall under horizontal forces and bargaining power of suppliers and buyers are considered under vertical forces.
The intensity of the forces in the industry helps decide the profitability of investing in the industry and market. With the competitive forces growing stronger, the profitability of the business goes down. A decision on investing in the market depends on upon the attractiveness of the market (Martin, 2014). For example, if the barriers of entry into the market are low also high product substitutes are present, but the numbers of buyers and suppliers are less, the market situation would be considered to be very competitive as competitors would be more and prospects would be less as buyers are less, hence the attractiveness of business would be considered low as profit expectations are low from the market.
It is on the basis of identifying a market attractive or unattractive, in respect to the analysed organization, that the various features of the other dimensions can be analysed. For the same, a diagrammatic representation would help…..