You can download the solution to the following question for free. For further assistance in  accounting assignments please check our offerings in Accounting assignment solutions. Our subject-matter-experts provide online assignment help to Accounting students from across the world and deliver plagiarism free solution with free Turnitin report with every solution.

a. Calculate the following financial ratios for 2015 and 2014 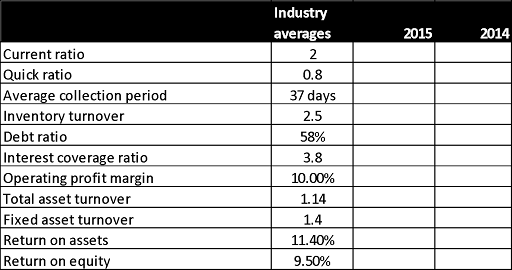 b. Evaluate the firm's financial position at the end of 2014 in terms of its liquidity, capital structure, asset management efficiency and profitability.

d. Describe your observations about the financial condition and performance of Gelato Industries from your answers to (a) (b) and (c).

Investment requires careful examination of the data of a company to evaluate its true worth. The general evaluation method adopted by investors is ratio analysis, based on data available in the financial statement. The report has discussed the attractiveness of the financial performance of Gelato Industries from an investment perspective. The company’s financial performance has been evaluated through financial ratios calculated from the data provided.

The company’s profitability ratio indicates a profitable venture to invest in the Gelato industry. Its ROA is in accordance with the industrial average, and the company is generating sound profit from its assets. The company’s return on equity has increased drastically in the year 2015 to 30%, which is a matter to notice. Though it sends a positive vibe between investors but the company need to analyse whether this growth is temporary or long term.

Lastly, to be concluded, with a high return on equity, it is profitable to purchase a share of the company as compared to debentures. The company is using around 60% debt to fund its ventures; its return is also diminishing, but equity return is increasing over time.